If you’ve been following along with us either here on the site or on our social media pages, you know by now that this year, What’s on the Menu? was invited to be a part of the 2015 Greenwich Wine and Food Festival presented by Serendipity. I fully admit to being quite excited about this. While, despite the name, WOTM isn’t really a ‘food’ site, I do pride myself in letting people know about happenings in Stamford restaurants, bars and events. Maybe you’ve seen our new tagline on Facebook (thanks to DJ Mark—aka Dancin’ Mark—Smith for coming up with it), “What’s on the Menu is literally a gourmet menu of tasty events happening on any given night in Stamford.” To be invited to such an amazing gathering of chefs, mixologists and beyond? Well, I was more than honored to be asked and certainly hope to have other opportunities such as this one in the future. So enough of that…let me tell you about this fantastic day… 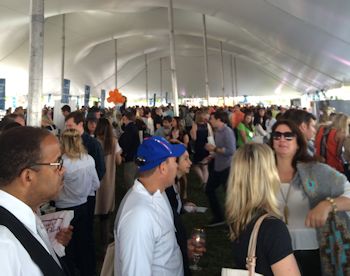 Held at Roger Sherman Baldwin Park on the waterfront in Greenwich, we were welcomed by the nicest people and the greatest weather. As we passed through the gates, white tents greeted us proudly. As we walked around taking it all in, the Celebrity Cruises rep stopped me and asked me to sit “in the big chair”. I kid you not, this was a humongous chair!  Ever want to feel like a kid again?  This did it. It’s always great to start off a day with a bit of humor.  After getting my first photo out of the way, it was off to the tasting tent itself where over 150 food, beverage and other vendors awaited us.

Every kind of food and drink imaginable was available to us throughout the day. In the span of the first ten minutes that I was in the Grand Tastings tent, I tasted gourmet beef jerky, champagne ketchup, absinthe chocolates and a Bloody Maria. As the day progressed I would go on to try pulled pork, smoked sausage, prize winning hamburger sliders and my first ever taste of buffalo meat tacos.

Representing WOTM and our motto of “Keeping it Local”, I had walked into Saturday’s event with the mindset that I would like to check out as many Stamford’s vendor tables as I could.  I’m proud to say, Stamford was very well represented at this gathering.

Starting with the gentleman from Barcelona Stamford who was busy hand carving meat for each guest. I do apologize for not getting his name, but what a welcoming guy he was! I’m a fan of Barcelona (fiddlehead ferns are an addiction of mine) and it’s always nice to know that their people are just as friendly off-site as when you dine with them.

Pinot’s Palette was the next stop on my ‘Stamford tour’. I’m sorry to say I did not get to meet anyone from there, but they had the easels all set up and folks painting up a storm at each and every one. What a great souvenir to take home!  I then got to shake hands with the nice gentleman from Tomatillo Taco Joint from the Stamford location on Broad St. handing out the handcrafted tacos.  Have to say, their setup was as welcoming as their smiles. 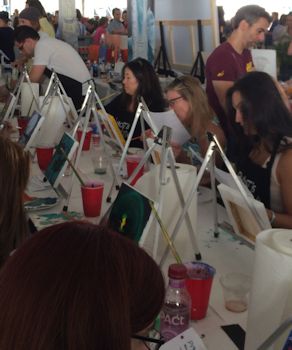 Fun at the Pinot’s Palette tables.

Now, as someone who is a fan of BBQ, let me tell you how happy I was to see that both Dinosaur BBQ and Brother Jimmy’s were there in the Grill Master Party tent! I was able to get the pulled pork in both spots and I could have easily set up a chair at both locations and just ate there the whole day. The ‘Dino’ guys were very much in synch with each other and I’d like to say thanks to the Brother Jimmy’s girls who were serving that day for talking to me for a few minutes. Considering the lines, this was hard to do. But they were so outgoing and were smiling the whole time!

I’d be remiss if I didn’t mention a particular Stamford-based company who was also in the Grill Master Party tent. Barbecue and beer go together SO well, so imagine my happiness to turn and see Stamford’s own, Half Full Brewery serving up their best. I was able to try both their Toasted Amber and Pumpkin ales as well as have a chat with Brian who was just the nicest guy. This is a man who loves what he does and it was so great of him to take the time to talk to me. There is a lot happening at the brewery, so please make sure to click their link to see a list of events and to sign up for their email alerts as well! 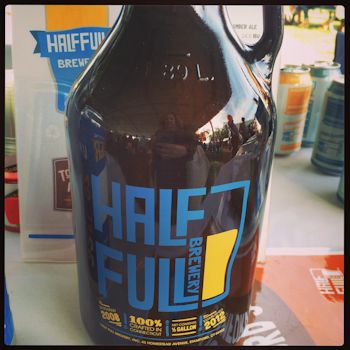 There was so much to take in during the day. The Empire City Casino tent had the roulette wheels spinning and hosted the 2015 Top Bartender Showdown hosted by Greg “Baba Booey” Dell’Abate, there was the Tacos and Tequilla tent which had, just what it says…tacos and tequila. This is where I tried the above mentioned buffalo meat taco. There was the Cocktail Demo Tent, there were wine and beer parings, celebrity book signings and for the VIP’s, the Big Easy dinner with Chef Alex Guarnachelli and food by Stamford’s own, OnTheMarc Events! And of course, the big stage where later in the evening, CMA & Grammy winning band Little Big Town would perform for the crowd.

Speaking of celebrities, I think my favorite event of the day was the Budweiser and Burgers Challenge. The emcee for this grilled beef on a bun extravaganza was Travel Channel’s Adam Richman and the judges for the challenge were…from Food Network: Geoffrey Zakarian, Alex Guarnachelli and Terry French as well as Top Chef winner Harold Dieterle and the one and only celeb chef, Rocco DiSpirito. These folks got to eat the best burgers around and I didn’t envy them their job of trying to decide which one was the best of the best. But when all was said and done???  Plan B was crowned the Best Burger in the Budweiser and Burgers Challenge!

Celebrity Judges at the Budweiser and Bugers Challenge

One more thing before I move on…this event is called the Greenwich Wine and Food Festival and so far, I’ve only really talked about the food. I do need to mention a few ‘spirits’ before all is said and done. Now, I’ve mentioned the Bloody Maria (for those who are unaware, it’s a Bloody Mary made with tequila instead of Vodka) and the beer from Half Full Brewery…here are a few other things I sampled: an incredible white wine from Angelini Wines, a new chocolate-mint Vodka from Iceberg Vodka (which tasted like a peppermint pattie and can already see putting some in hot cocoa this holiday season) and my favorite drink of the day—the Cow Wow. What is this concoction you ask?  It’s Butterscotch Schnapps mixed with ‘cereal milk’. They actually take milk, pour it over corn flakes, brown sugar and cinnamon and let it soak for hours. Then drain it and use the milk in the drink. I can’t express how awesome this drink was!

There is still so much I could write about this day and know that I’ve forgotten to mention quite a bit.  However, I don’t want to end this article without mentioning some people who really helped to make the GWFF run as smoothly as it does. I really need to do a special shout-out to both the volunteers and the Greenwich PD. They did a wonderful job, were super friendly and kept smiles on their faces throughout. And to the couple who selfishly gave up their food to two of Greenwich’s finest after they waited online only to find the vendor had run out of food?  Outstanding and really, I couldn’t ask for a better story to come out of this whole day.  The two officers I spoke with were so grateful and touched that anyone would do that.

One thing that really made this day so special is that the Greenwich Wine and Food Festival is also a fundraiser for the Hole in the Wall Camp. Founded in 1988 by Paul Newman, this group is dedicated to giving seriously ill children and their families a ‘different kind of healing.’  For more information on how you can help, volunteer or donate to this awesome cause: http://www.holeinthewallgang.org/

Before I leave, I’d like to say a special thank you to Shelley K. for asking me to attend this event and also, to all those who made the 2015 Greenwich Wine and Food Festival possible thank you as well. It was an incredible day and one that I was so, so happy to be a part of.  Until next year… 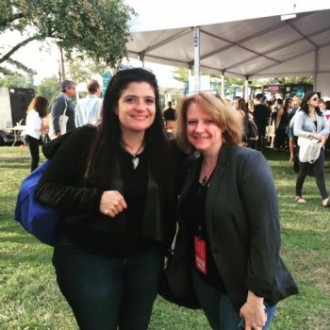 By, Christie Cartolano for What’s on the Menu?

FYI:  We posted many photos of the event to our Instagram and we will be posting a LOT of them to our new Flickr album as well.

Follow What's on the Menu? on WordPress.com
Join 3,282 other followers