It’s Halloween time and of course thoughts lead to ghosts, goblins and things that go bump in the night, right?? Well, Stamford has its share of legendary stories and in the spirit of the season, would like to share a few with you now.

From its origins of its original Native American name ‘Rippowam’ and the settling of the town in 1641, (the name was changed to ‘Stamford’ in 1642), to our current city whose landscape is ever-changing with the tearing down of the old to make way for the new, Stamford has quite a colorful history. So I decided to do a bit of research on some of the more unusual stories of Stamford that you may or may not be aware of. As a lover of the strange and paranormal, Stamford did not disappoint.  Not that it ever does in this realm!

Columbus Park:  Did you know that the downtown area was once the city’s common burying ground? Columbus Park was Stamford’s main cemetery and some of the older graves were moved to Old North Field Cemetery so that Main St. could be created. Think about that the next time you are dancing to a band at Alive at Five! http://www.findagrave.com/cgi-bin/fg.cgi?page=cr&CRid=2573843 Mentioned in the book:  Insubordinate Spirit: A True Story Of Life And Loss In Earliest America 1610-1665

(great read if you want to learn more about this area!)

Witch Trials:  Salem, Massachusetts wasn’t the only place to have Witch Trials! In fact, Connecticut had witch trials going back as far as 1647. And while Salem put 19 to death for incorrectly being found guilty of practicing witchcraft, the Connecticut trials of 1662—ten were accused but only four were tried, convicted and tragically executed.  So what is the Stamford connection??  Stamford resident Elizabeth Clawson was one of two to be accused in 1692 (same year as the famous Salem Trials). She and fellow accused ‘witch’ Mercy Disborough were tried in (then spelled) Fayrefeild and tested to see if they were in fact witches. The test was brutal. You may have heard of ‘dunking’, but this is what is involved…they bound the right hand to the left foot and the left hand to the right foot and then thrown into water to see if they would float. If one floated, they were considered guilty but if they sank (and by the way, drowned) they were innocent. Either way, it was basically a death sentence. However, even after the ‘test’ and after testimony given during her trial, she was found to be “A woman of Pease (peace)”. 76 Stamford residents and elected officials signed and turned in a petition on June 4, 1692 standing by her good character and hoping to spare her life. She was in fact found NOT GUILTY and returned to Stamford where she lived until her death in 1714 at the age of 83.

For more information on this, you should read the case (which includes the scan of the original petition): http://ketchcetera.com/ARTIFACTS/Elizabeth_Clawson_Witchcraft_Trial.pdf and there is also a book on it: Escaping Salem: The Other Witch Hunt of 1692 (New Narratives in American History)

or go to the website of one of Elizabeth Clawson’s decedents: http://www.questancestor.com/?p=4 (photo courtesy of this site) 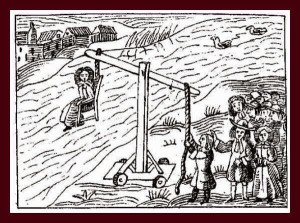 Hoyt-Barnum House: Built in 1699 on land once owned by Munsee Indians, the Hoyt-Barnum house is the oldest home in Stamford. A true testament to the city’s founders, this wooden structure has held up through the roughest of New England weather for over 300 years. While the house itself is wood, the chimney was created of stone and (as per Stamford Historical Society) held together with such materials as mortar with clay, straw and animal hair. This home, built by Samuel Hoyt has a dark secret. It is said that the house and the land surrounding it is haunted by a family member of Hoyt’s that drowned in 1755.  However, that is not the only lost soul on the property. Hoyt’s first wife passed away inside the house in what was known as the birthing room—which is also where the children slept. This home saw many people living there including over 14 children who were raised in the home over the years. One infant died in the home. The Stamford Historical Society used to give tours around Halloween for years telling the tales and a few folks even caught anomalies in photographs taken at the home. One of the most known is the golden light photo which was taken in the area above what was the birthing room. Someone on one of the tours was able to capture a strange light coming from the corner of the room when there was no light around. The Historical Society will not let the photo be published but they did used to show it on tours. Unfortunately, due to the upcoming move of the house from its current location (and again, its location for over 300 years) to its future one at 1508 High Ridge Rd. next to the Historical Society, the house will be closed until its reopening in 2017. Our question is this…will the moving of the home stir up even more spirits?? To learn more about the Hoyt-Barnum House: http://www.stamfordhistory.org/hbh.htm (photo courtesy of http://simonhoyt.com )

Fort Stamford:  Just as Stamford is often caught in the middle of the Yankees/Red Sox war of baseball, so was it caught between the British Loyalists and the citizens of the newly formed United States of America during the Revolutionary War. Fort Stamford, which was occupied from 1781-1783 was part of this ongoing battle and was commanded by Brigadier General David How Waterbury Jr. Fort Stamford was commissioned as a Winter headquarters for troops protecting the area from British soldiers and among those housed there were local militia members and those enlisted to fight for a new independent country. If you think New England Winters are bad now, think of it for soldiers in the 18th Century. No proper warm clothing, relying on small fires for heat and food was sparse. As this was during the British Invasion of our area, the stealing of cattle, money, crops and other animals and resources happened over and over again. How any survived at all was a miracle. However, some were not so lucky. If the elements didn’t get them, hunger, illness and fatigue did. According to one account from 1782, a foot patrol of 14 Patriots were slaughtered by British troops on horseback.  The land that Fort Stamford sits on, like all land here, was once occupied by Native Americans. The Siwanoy Tribe once lived and died along the Minus River. The lands hold a tragic past and many souls rest uneasy because of this. Fort Stamford is one of these areas.  Jon Nowinski, journalist and member of the Smoking Gun Research Agency brought his team to the Fort site for a series of investigations. His team had some pretty intense encounters and not just on film. He mentions physical encounters, strange issues with their equipment, etc. And it’s no wonder. This site was not exactly the quiet, park-like place it is now! As with many hauntings reported in residential homes, activity seemed to perk up after a renovation on the grounds took place. It seems that after it was prepared for the Bicentennial celebrations, some things got a bit stirred up there. To read about Mr. Nowinski and his team’s experiences at the site, please check out this article from the Stamford Advocate published in 2014: http://www.stamfordadvocate.com/news/article/Fort-Stamford-haunted-by-history-and-maybe-ghosts-5859424.php Also, if you’d like to learn more about Fort Stamford and the restoration project: http://www.stamfordhistory.org/rg12.htm (photo courtesy of tripadvisor.com)

Noroton River:  You’ve heard of Nessie, Champ or the legend of Georgie? Of course we were referring to the Loch Ness Monster of Scotland, Champ the beast of Lake Champlain, NY/VT and Georgie who was a creation of the former director of the Lake George, NY Historical Society.  There are famous sea serpents all over the world that have become myth and lore throughout history and yes, there are a few of us still hoping they will be seen but not captured. Stamford had its own serpent spotted in the Noroton River in 1889 while a man was clamming. Now remember, back then, the river was much wider than it is now and from time to time, aquatic life would make its way up from the Long Island Sound—in fact, according to the article published back then, a shark had made its way up to almost the exact spot the serpent was seen a year earlier! This was no shark sighting though. To quote the Boston Globe article on the story, Mr. “Ruscoe was suddenly confronted by an enormous serpent that stuck its head out of the water right alongside the boat. It had a large black head and its back was a copper color. It ran a big red tongue out of its mouth and emitted a hissing sound.”  I don’t know about you, but that would send ME running for the hills!  And that is exactly what happened!! Mr. Ruscoe was so frightened by what he had seen, he ran for about a mile before stopping because he was too tired to run any longer. However, when he returned, both his boat and his stash of clams he had worked hard to get that day had disappeared.  He was not alone in seeing this creature though. Over a dozen people claimed to have seen this serpent on this day and because so many people talked about it, they formed an ‘expedition’ to go and hunt it down. They never found it again and believe that whatever it was, made its way back to the Sound. So next time you’re out in the water off the Stamford coast, be sure to keep your eyes open…it could still be out there!  The original article appeared in the August 18, 1889 edition of what was then known as the Boston Daily Globe under the headline: Sea Serpent Season Opens. You can read it here: http://cryptomundo.com/cryptozoo-news/noroton/ (photo courtesy of http://patch.com/connecticut/darien )

So just when you thought you knew your city, along I come and shed some light on just a few of the many stories of Stamford. I’m a big believer in the two phrases: “Stop and Look Around” and “Learn Where You Live” and if you follow WOTM on Instagram, you know this to be true.

Take a little time here and there to read up on Stamford and find out its history. To maybe find out why your street or favorite park has that particular name or to look up and see if the part of the city you live in now always looked like that. Or take a walk! You may see your neighborhood in a whole new way. You may find a forgotten cemetery that may have one of Stamford’s founding families in it. (But please, be respectful on your visits. I can’t stress that enough.) Or you may find a house on your street that you didn’t realize is from the 1800’s. We are fortunate enough to be in that kind of a city that every corner has some historical value to it. And before it all gets torn down, moved or built over…take it in while you can.

Sure, you may come up with a ghost story or two in the process, but isn’t that part of the fun? And at Halloween time…there is NOTHING wrong with that!

Now go forth and as always, Keep it Local Stamford!!!

By, Christie Cartolano for What’s on the Menu?

6 thoughts on “The Stranger Side of Stamford”