(photos credits: myself unless otherwise noted)

When you think about an archaeological dig, your mind may turn to digging up a long lost tomb in the desert somewhere or Indiana Jones running away from the giant boulder. What you may not picture is jumping in a car, going just about 2 miles from your home and having the chance to dig near the heart of downtown Stamford.

Last Sunday, several local volunteers and myself had the opportunity to get our hands (feet, legs, face…really every part of us) dirty and act like kids as we dug into the soil around the grounds of the historic Hoyt-Barnum House (HBH). The oldest house in the city of Stamford has been in the same spot since Samual Hait built it in 1699, just 58 years after the founding of Stamford. As I have written before, the land was originally owned by Munsee Indians and with the land around the house having only been used by it’s residents and not marred by construction, digging on the property could lead to findings from many different time periods and people.

‘E’ Square–my home for the day!

Just before the dig, I wrote some of why we were going to be there last weekend. (see: Digging Up a Bit of Stamford History ) The Hoyt-Barnum House is getting ready to take a journey up the road a ways to sit on the Stamford Historical Society property to make way for the construction of the new Stamford Police Station.

I would like to address this issue before I go further. Leading our teams for the digs was none other than the President and Executive Director of the Stamford Historical Society Dr. Thomas Zoubek. Having Tom there was like having a living, breathing Stamford version of Google. What an honor it was to work with him and how patient he was as I asked question after question.  Of course one of my biggest questions was about the police station and the HBH grounds. Knowing only what I had read about as far as local news reports and talking with some folks over the last two years, I was personally against the moving of the house. I as well as MANY I’ve talked to always came out with the following: How dare they? What happens to its historical status if they move it? Why can’t the police station go someplace else? Will the house be ok? On and on. Dr. Zoubek let me ask it all and filled me in on many aspects of the move putting my mind to rest. Now let me share some of what I found out…

We all know that Stamford is in dire need of a new station. After working with the historical society, the grounds of the HBH as well as the neighboring smaller house on the corner there will be the future home of the station. The Hoyt-Barnum House is in very bad shape sad to say. There has not been a tour inside of it (much to my dismay) for quite some time as it is no longer up to code. There is much deterioration in the wood and as we were discussing this, we noticed a piece of a windowsill down and the wood rotted out…so if someone ever needed proof, there it was. The house, while once in a wonderful spot in Stamford, now is on an extremely busy street. The vibrations of the many cars and trucks that go by it day in and day out are taking a severe toll on its structure. Also, when it was structurally sound enough for tours, there was really no parking for it. All these things and more add up to the fact that moving it is very much the right thing to do. It will be taken care of properly in terms of getting it up to its new home and it will be fully restored and made safe so that tours can once again resume in this beautiful house.

I hope this puts minds to rest as much as it did mine. Part of why I wanted to go on the dig was so I could go with gusto and say, “no you can’t move this house!” But the more I was there and the more information I got, I realized, this poor house needs to be moved in order to save it and its history. 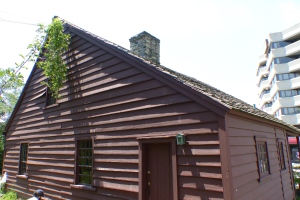 From this angle, you can see that the house isn’t in great shape right now.

The dig itself was a whirlwind. A day sitting side by side with folks who are just as passionate about local history as I am and it was awesome. Made up of mostly Stamford residents who, like myself, are just as upset by the tearing down of everything in our city only to put up more and more apartment complexes that we frankly do not need. We talked about how other Gold Coast towns preserve their historic homes, buildings, etc but Stamford continues to ‘pave paradise and put up a parking lot’. The anger and intensity was there and great discussions were held…at the same time? So much fun!

The dig took place both Saturday and Sunday and I was involved in Sunday’s dig. I was among an intrepid group of volunteers who braved the intense sun and heat to get dirty like kids and get excited every time we would hear those incredible words: I FOUND SOMETHING!

We were paired up and each pair given a square to begin digging into. My partner Richard and I seemed to have a great little plot of land as over the hours we uncovered shards of pottery, glass, shells from oysters and clams, hand forged nails and yes, even bones.

I’m not going to lie…the bones freaked me out! I at one point stood up and said, “if the next thing I uncover is staring back at me, I’m out of here!” But Tom came over and checked out the large, in tact bone that I had found and said, “no worries, that’s from a pig.” We found out later that we were digging in the area that was thought to be the former tenants Summer kitchen! So many of the items we were finding were from dinners cooked long ago in a century far, far away.

The findings were so fantastic the day I was there. Besides former dinner items and nails from various centuries, the pair digging right at the back door unearthed a tiny ‘china doll’ type of head (again, the whole eyes staring back at you never gets easy) as well as what we think were some of the doll house toys that went with it. Pipe stems were unearthed in various locations…the gentleman with the metal detector was finding pieces of iron work just all over the place! And the pair next to myself? They came up with some GREAT items! A buckle still in tact as well as something that looked like a small grate for cooking with. (although what it actually is still being determined) There was one large piece of metal in their square that unfortunately we were unable to get up that day. It was buried a bit deeper than the rest of the items and roots had grown all around/through it so to get it up, other equipment would have to be brought in. 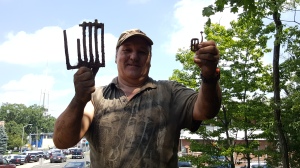 Phil Peluso of Stamford holding up two of his amazing finds!

There was the large grinder’s wheel and iron kettle drum cooking pots and then…there was one piece that no one that day could identify. Thinking back on it now, I wonder if it could have been where they cooked with those kettle drums, but really, they were a mystery. 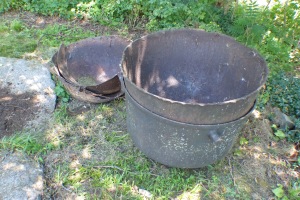 I could write pages upon pages of my experiences that day and one day I hope they will be part of a collection of stories I’m writing about Historic Stamford that is getting so lost now. What I would like to finish this story with is this…This dig was the chance of a lifetime…a bucket list type of an opportunity. And to be with a group of people who were just as excited, as enthusiastic and who braved the harsh elements that day just to be a part of history was truly an honor. It is also something I hope I can be involved with again.

The Stamford Historical Society and their members, staff and volunteers do such amazing work and with the deterioration of our city’s history, they face the challenge of trying to preserve, document and restore all that they can for the future generations of its citizens. Please, consider joining the Society as a member and/or as a volunteer! Help as they maintain the historic cemeteries around the city, as they lead tours to various neighborhoods that you may have driven through a million times but never really looked around. As they hold incredible lectures in their building and as they keep up their resources for tracing back family trees, deeds and more. Donate your time (or money) or check out one of the many events they hold throughout the year—you’ll be surprised what you may learn!

Thank you to Dr. Tom Zoubek, the Stamford Historical Society and a special thank you to Lizzy Zawy for keeping myself and by extention our WOTM followers in the loop on what is happening at the Society. I am providing links below on how you can get involved and help preserve Stamford’s History.

Here is the list of incredible folks I had the honor of working with—forgive me if I’ve left anyone out:

For more information on the Stamford Historical Society: http://stamfordhistory.org/

Read more history on WOTM: The Stranger Side of Stamford

Be on the lookout for more writings on Stamford history here on WOTM. #LearnWhereYouLive

3 thoughts on “Unearthing the Mysteries at the Hoyt-Barnum House”